“As a writer, I can and should include—for instance—black characters in my story,” says Lucas, who is a white male, “so long as that story isn’t about blackness.” 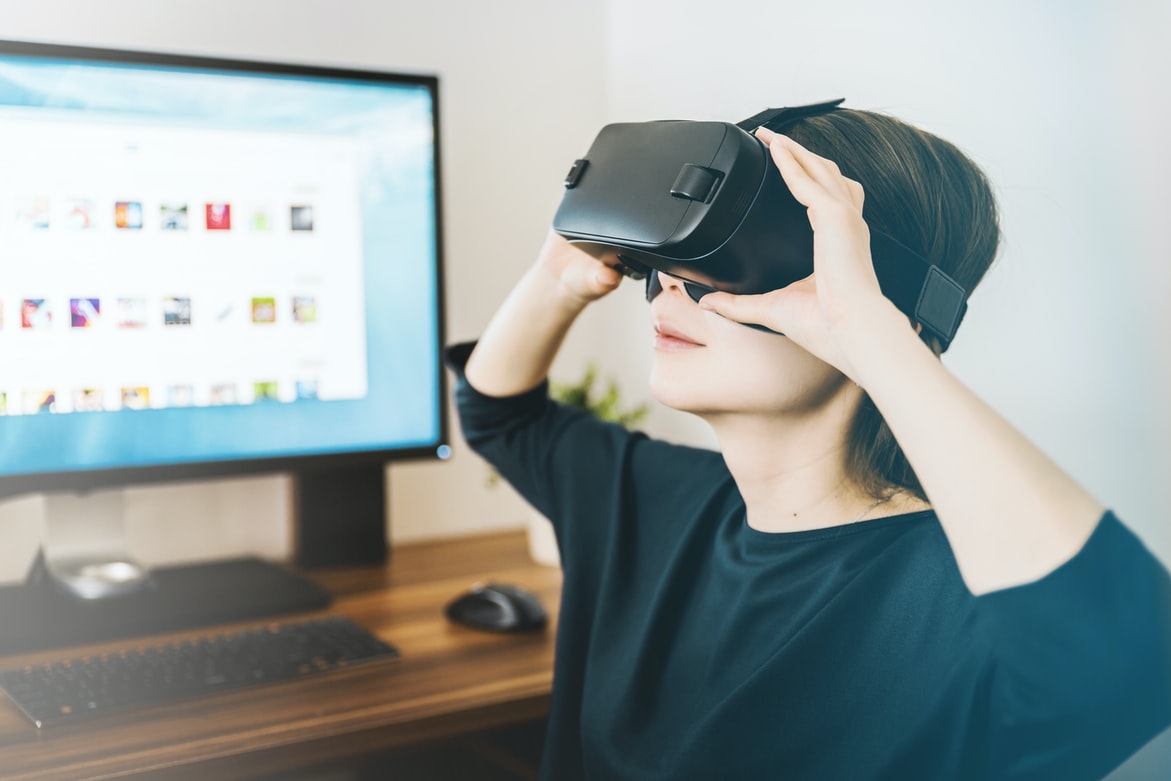 We’ve seen a lot of advancements in virtual reality technology over the past half-decade since the first Oculus Rift was released on the market. Headsets have better screens, more sophisticated tracking, and a wider field of view. We’ve been introduced to untethered headsets that are lighter and more comfortable to wear and have integrated audio that eschews the need for bulky headphones.

However, there are still many issues with both hardware and software that make it difficult for some persons to truly enjoy the VR experience. Players and VR enthusiasts who struggle with accessibility issues may find design choices made by developers and manufacturers become obstacles to a great user experience; it’s up to us to ensure that we’re creating products that avoid these pitfalls and create an ecosystem that doesn’t discriminate against persons with a disability.

When choosing a platform for Flow Weaver, the team here at Stitch Media chose the Oculus Quest 2, in part because of its lightweight design and lack of a clumsy tether and it did not require a PC. From an accessibility standpoint, this helps individuals who can use a headset but might find it difficult to put one on without assistance or need support with “cable management”—keeping the tether untangled.

Beyond hardware choices, we also looked at the basic principles of gameplay design we wanted to include in our mechanics. For instance, many VR games require or at least assume the player is standing, but that choice/assumption can be a limitation for certain players. Instead, we opted to make Flow Weaver a seated experience and ensure that we were accessible to the largest audience possible.

Additionally, we looked at our motion controls. Reaching out to grab objects and manipulate them can be a very rewarding experience for players, but again also limits those who deal with mobility issues. Having support for gamepads is an option that we considered but accessibility considerations have to be balanced with many other factors, including the availability of resources, the time cost, and existing tools or frameworks. While Oculus has prefabs that can be used for controller support on their hardware, we were still considering Flow Weaver for multiple HMDs which ruled out this support. This is one of the greatest concerns for accessibility—if the manufacturers lock support for their hardware, it prevents some third-party support from products specifically designed to address accessibility issues.

In the end, our solution was to integrate the “Shadow Hand” interface that allowed for the standard Touch controllers to be used more like a traditional gamepad; players can move objects out of reach with simple trigger pulls, button presses, and thumbstick control.

Inclusivity in media is another area that has seen some progressive strides in recent years; however, that particular issue has some unique challenges—and opportunities—when it comes to virtual reality.

Including all audiences in a television show often means having meaningful stories and characters that represent our society’s wide and diverse range of peoples, cultures, and narratives. Individuals can see themselves reflected on the shows they watch and in the characters they grow to love. But what happens when you don’t “see” those characters; you “become” them?

When we first started talking about Flow Weaver, we wanted a character creation option that allowed for a wide range of options, giving the player the ability to make the best approximation of themselves. We wanted to cover all races, genders, and body shapes. But when scoping out the work involved with accommodating even a small sample of these options, we quickly ran up against the same budgetary restrictions and time constraints as with controller support. Following that we wanted to give you different voice options—more masculine or feminine, as well as a non-binary option. When it became clear that this too wasn’t feasible, we didn’t want to lose this really interesting thing that was important to us—so the decision was made by the story team to have the protagonist be canonically non-binary.

Stitch Media had partnered with Silversting Media on Flow Weaver, whose principal partner Lucas J.W. Johnson was the creator and storyteller of the game’s fictional fantasy universe. Lucas posed this question and together the answer we found was to hire a non-binary voice actor. Ciarán Strange is a great actor and can authentically tell the story of a non-binary character because they have first-hand knowledge of that experience. That authenticity is an important distinction when considering representation versus inclusion.

We’re really excited about how some of these viewpoints have been addressed in Flow Weaver, and we continue to experiment with the qualities that make VR storytelling unique and compelling experiences.

“As a writer, I can and should include—for instance—black characters in my story,” says Lucas, who is a white male, “so long as that story isn’t about blackness.”

Being put into someone else’s shoes can help open your eyes to other kinds of experiences. But it can also lead to an uncomfortable disconnection from the virtual character we’re inhabiting. Controlling the character of Aloy on-screen in the console game Horizon: Zero Dawn is a very different experience from what would be stepping into her avatar in VR.

However, It might be okay to have that bit of dissonance to put the player into a specific position and tell them something about that experience. Inhabiting a role that doesn’t fully represent us as persons is also something that might feel strange or foreign now, but as we get more used to the idea, it may become the norm. We’ve been creating avatars that don’t look like us for games for almost fifty years, and the growing popularity of cosplay points to our ability to role-play. Lucas’ story for Flow Weaver actually comes from his long-standing Dungeons & Dragons campaign, where this kind of “play-acting” is part of the landscape.

“Whenever I play tabletop role-playing games I don’t really notice when I switch between saying my character does this and I do this.” Lucas and his fellow RPG players have grown used to a multi-modal approach to character portrayal and integration, shifting effortlessly between the perspective of author and actor.

We’re really excited about how some of these viewpoints have been addressed in Flow Weaver, and we continue to experiment with the qualities that make VR storytelling unique and compelling experiences.